Get signed up to be among the first to receive recipes, workouts and science-backed advice straight to your inbox! 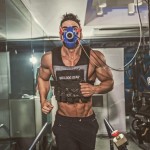